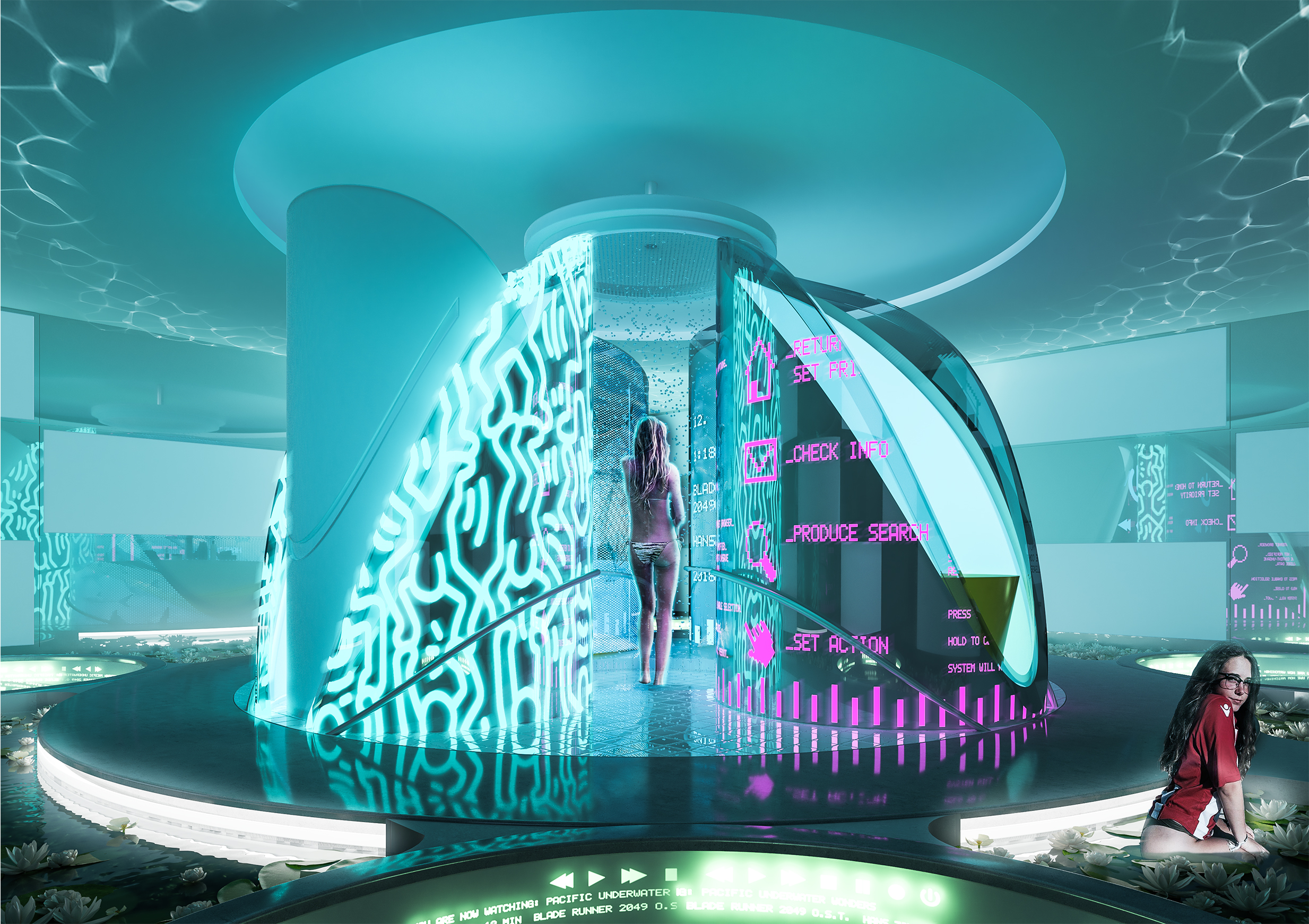 The background impulse holding the vision which defined our project was one of a metaphysical nature. We consider the ruling western view of the bathroom space one which does not places it in the same spatial category of other important spaces within the dwelling environment, such as the living room, the sleeping quarters or even the kitchen. The bathroom seems to fall under in the spatial hierarchy and somehow pushed away into a lesser qualitative ranking. Eastern concepts on the other and, consider it to be one of the most important spaces; one where one is to truly relax and come into peace. Following this line of thought, we envisioned a space which would first of all relate to the body in another conceptual way, a space which would reach back into a more spiritual atmosphere as that of the temple meaning that the experience of using it would convey a different approach to one´s own existence in its pure naked form. The quality of such a space would rely primarily not on a specific use of luxurious materiality or sanitary elements but on the very nature underlying its identity which is an understanding of the bathroom as a place for liberation. For this matter, we got our inspiration from the cave temples of Northwest-China with their Central Pillars which are an object of veneration, and where circumambulation was regarded as an efficacious method for sparkling a spiritual awakening. It is regarded as the axis mundi, the axis which connects the world of men to the world of the gods. 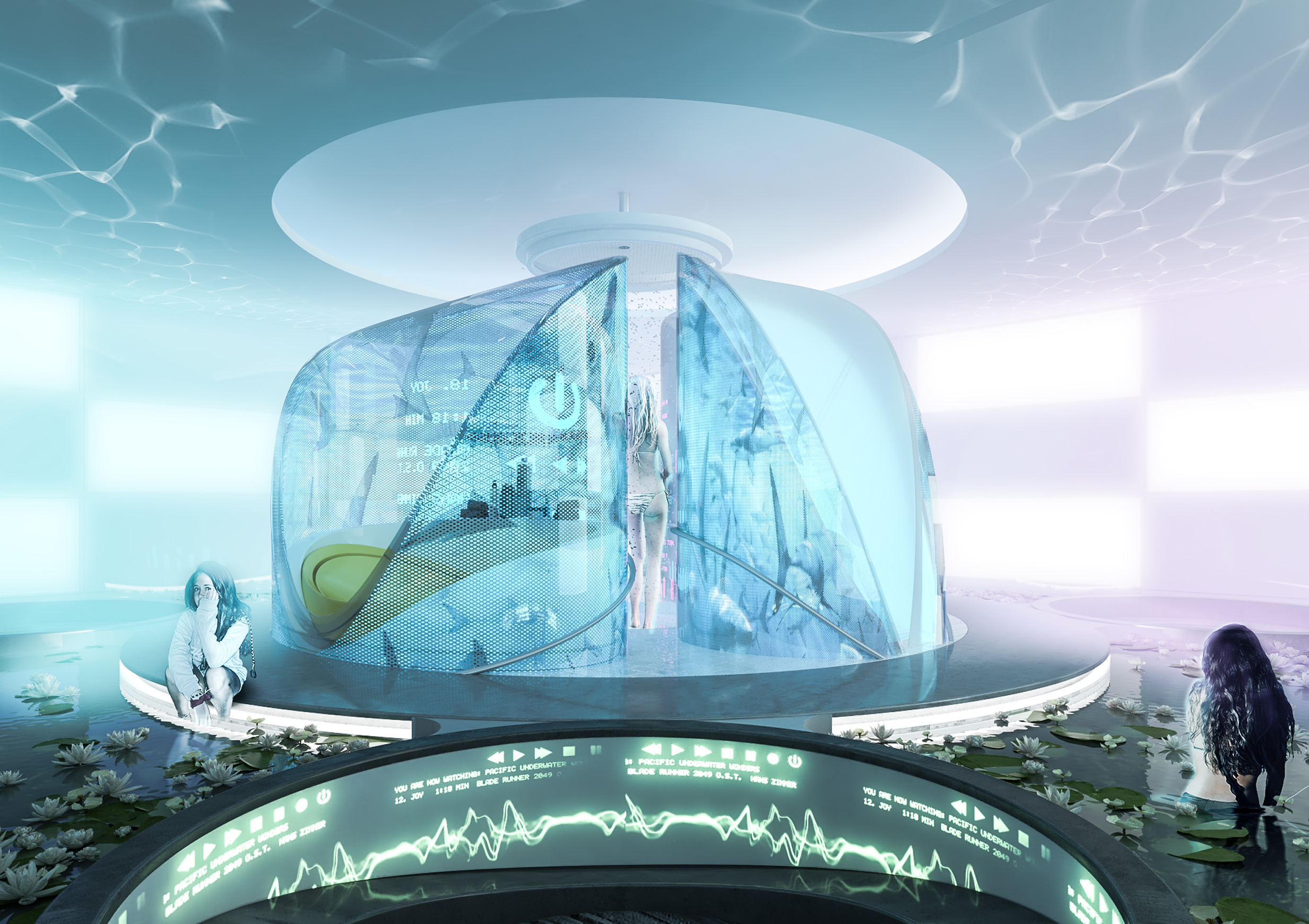 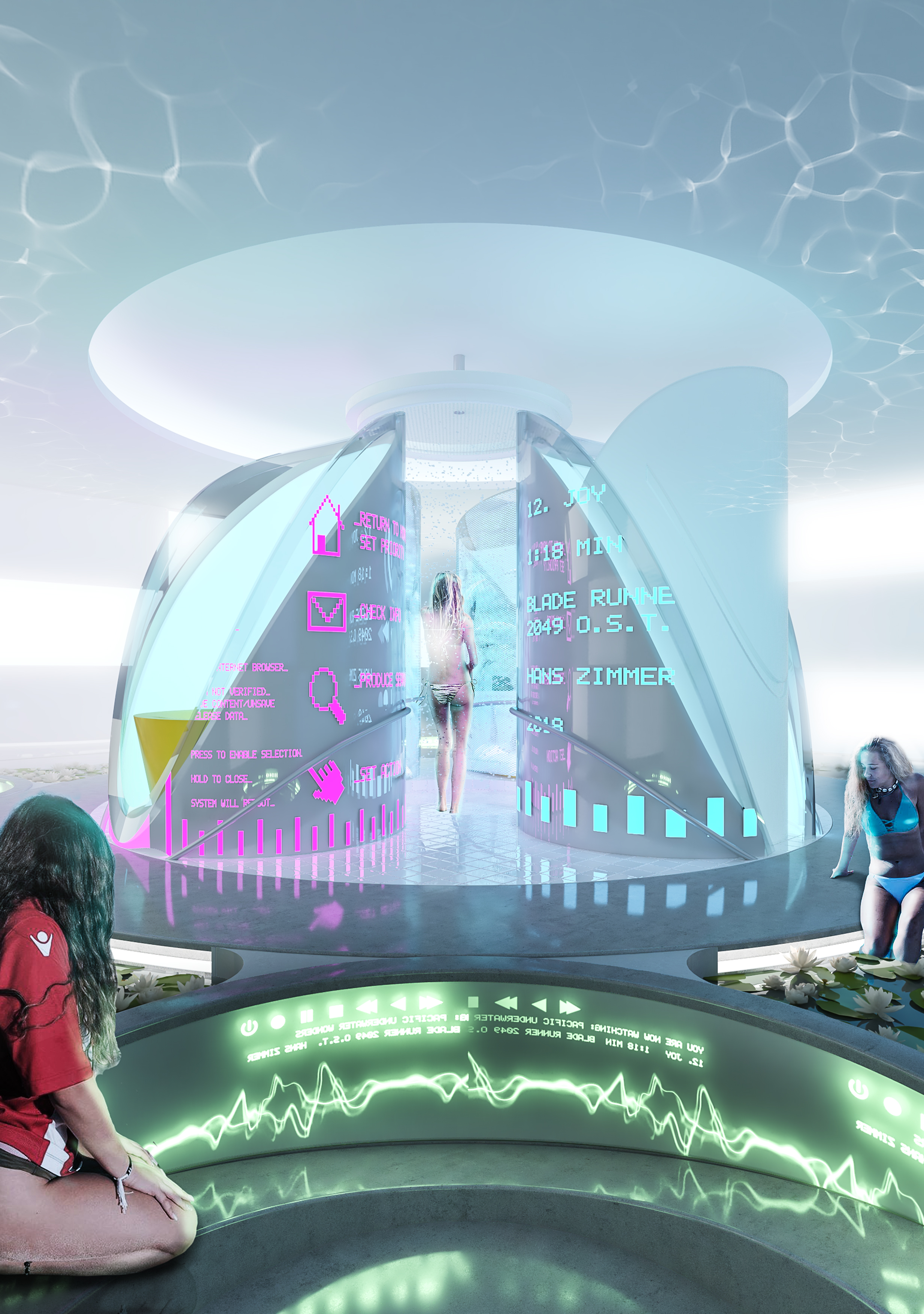 Our project formalizes an Avant-guard conception of the bathroom environment by defining a quite new understanding of its use. Our space merges together several spatial atmospheres: that of the thermae, the temple, the water garden and the new advances in technological interaction, which are combined to produce a space of enhanced mental and physical relaxation. Its relevance relies on the fact that in an ever speeding future and cosmopolitan stressed ways of life it will ensure its user a quality which has not yet been seen. The very usage of the space relies on different understandings of the toilet area and creates an interesting expansion for the body. 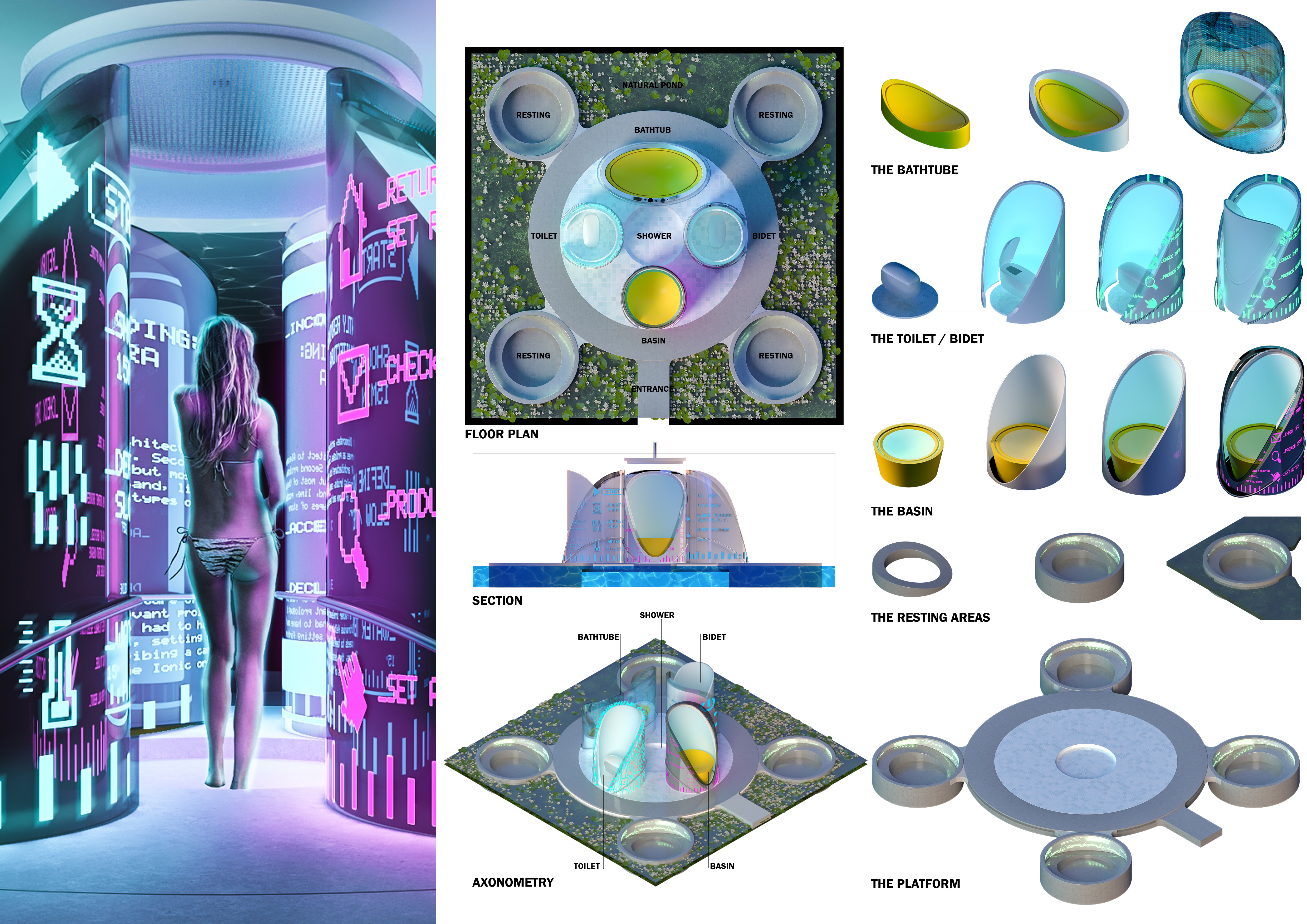 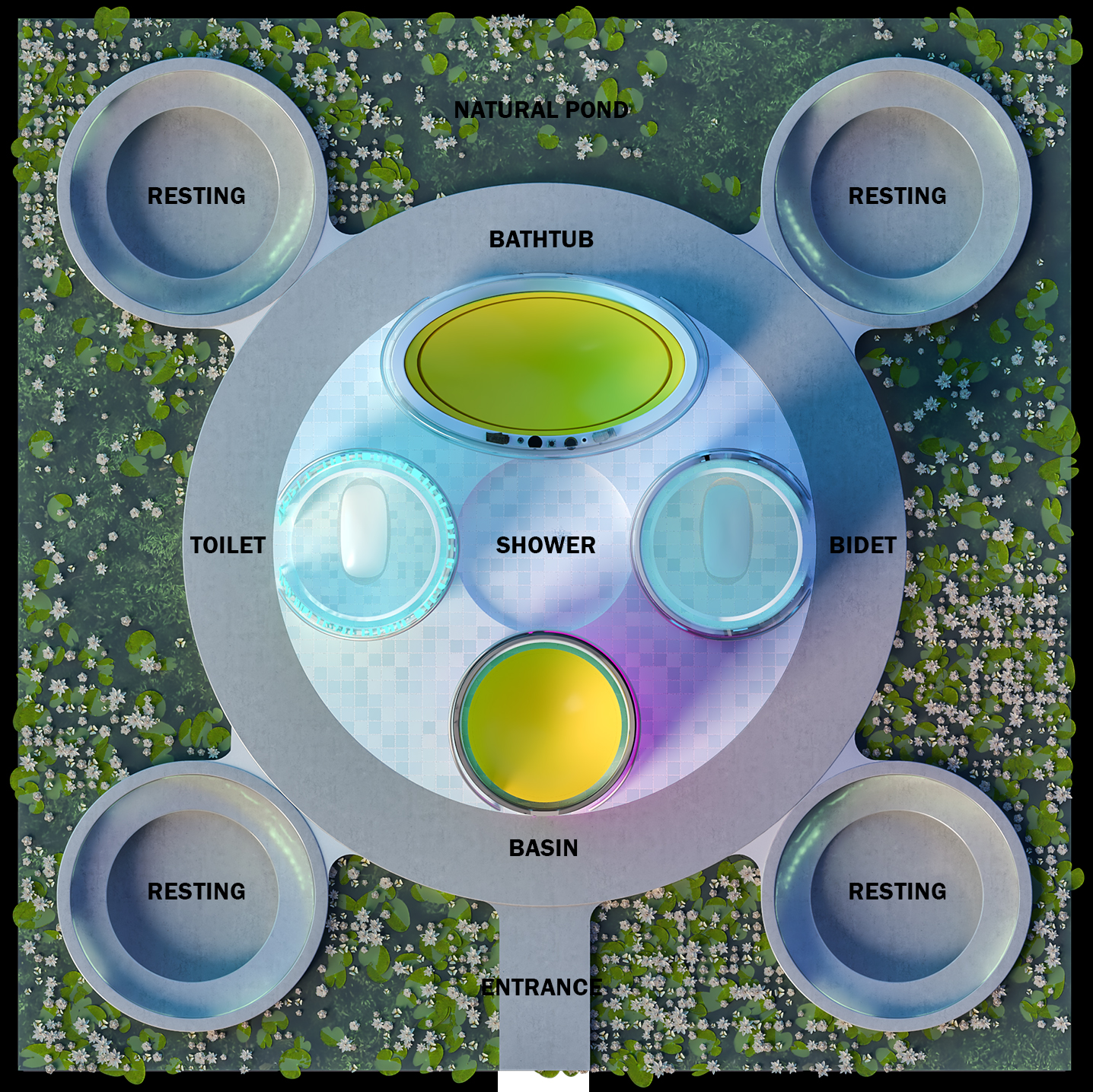